You can use any sweetener that you want in your Coconut Whipped Cream Recipe. Try maple syrup or agave. Powdered sugar would add some more fluff to your texture.

This vegan whipped cream recipe only requires 2 easy ingredients. I was trying a low carb diet when I made this so I used stevia. Stevia comes from a plant that isn’t metabolized by the human body.

That’s why stevia has zero calories, because our bodies don’t absorb the nutrients. I love science! The simple ingredients needed for vegan whipped cream recipe are canned coconut milk (full fat), and a sweetener of your choice.

This dairy free keto recipe is so easy

Store the coconut milk in the refrigerator a minimum of 4 hours. However the longer the better! I refrigerate them overnight when making this dairy free keto whipped cream recipe.

Refrigeration causes the cream to separate from the clear liquid. The coconut cream will rise to the top of the can. A clear liquid will sink to the bottom. You don’t want that clear liquid for keto whipped cream recipes.

What I do is spoon one scoop out then pour all the liquid out. This makes it easier to get just the cream out. Then scoop the coconut cream in a large mixing bowl.

Add your favorite sweetener and blend with an electric mixer. It helps if your blender sticks are cold as well. Your coconut cream should quickly become whipped cream.

Store in the refrigerator until ready to serve! Tip if you use a zero calorie sweetener this whipped cream is Keto and dairy free.

Thanks for visiting Anyreasonvegans whipped cream and frosting recipes 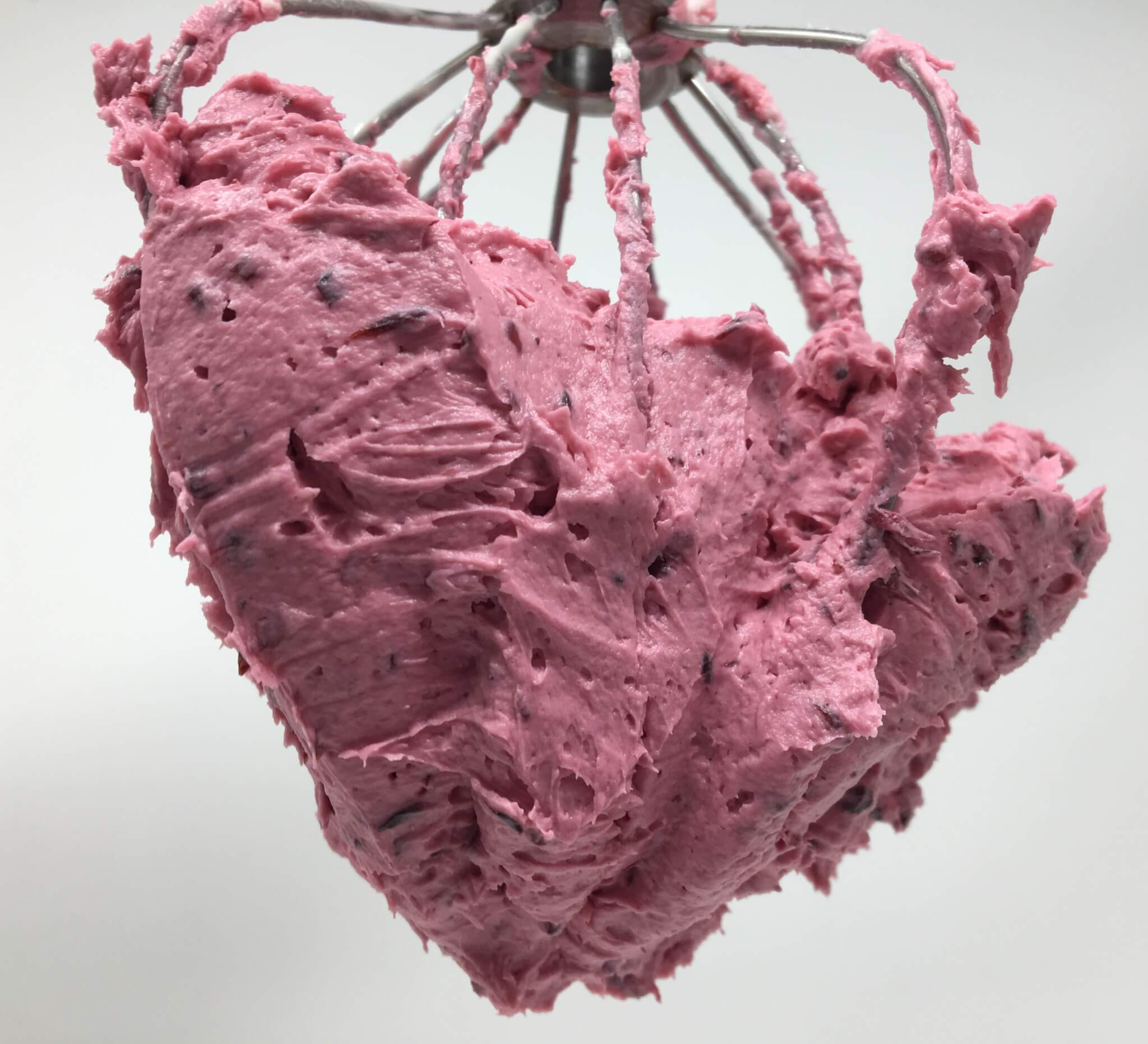 Blackberries are produced by different species of the genus Rubus in the family Rosaceae. They are related to raspberries but differ by whether or not the torus stays with the fruit. The torus is basically the stem. Blackberries retain the stem while the raspberry loses it.

The blackberry is not botanically classified as a fruit. It is an aggregate fruit containing small drupelets.  Perfect for this Buttercream Frosting Recipe.

Blackberries are high in vitamin C. Human beings cannot produce vitamin C on our own. It is essential for protein and collagen synthesis. Vitamin C is also essential for some neurotransmitters. Other benefits include immune system support and wound healing.

This recipe for vegan frosting is so easy

Smuckers Marshmallow Topping is delicious and totally vegans! Anyway my family and I just recently got a puppy and she is very sweet.

We love her very much but I had no idea how hard puppies were! She is very rambunctious and loud. The puppy bites very hard (trying to play) but it hurts so bad! She is a golden lab and is already bigger than my 1 year old daughter. I want to cuddle the puppy but she bites me and chews on my cell phone.

Potty training is impossible! She has already peed on the carpet one time today. We have puppy pads and put her outside in the yard a few times per day. However she just doesn’t understand yet that she can’t go wherever she wants!

My one year old want to play with her but the puppy jumps on her and scratches and bites! I hope she calms down soon.

This vegan frosting goes great on cakes and cupcakes

My favorite is white layer cake vanilla cake with blackberry frosting. I love to top with fresh blackberries and sprinkle it with powdered sugar! I’m giving myself dessert cravings just thinking about it.

This recipe made with fresh blackberries is beyond delectible

Thanks for reading my Blackberry Buttercream Frosting Recipe 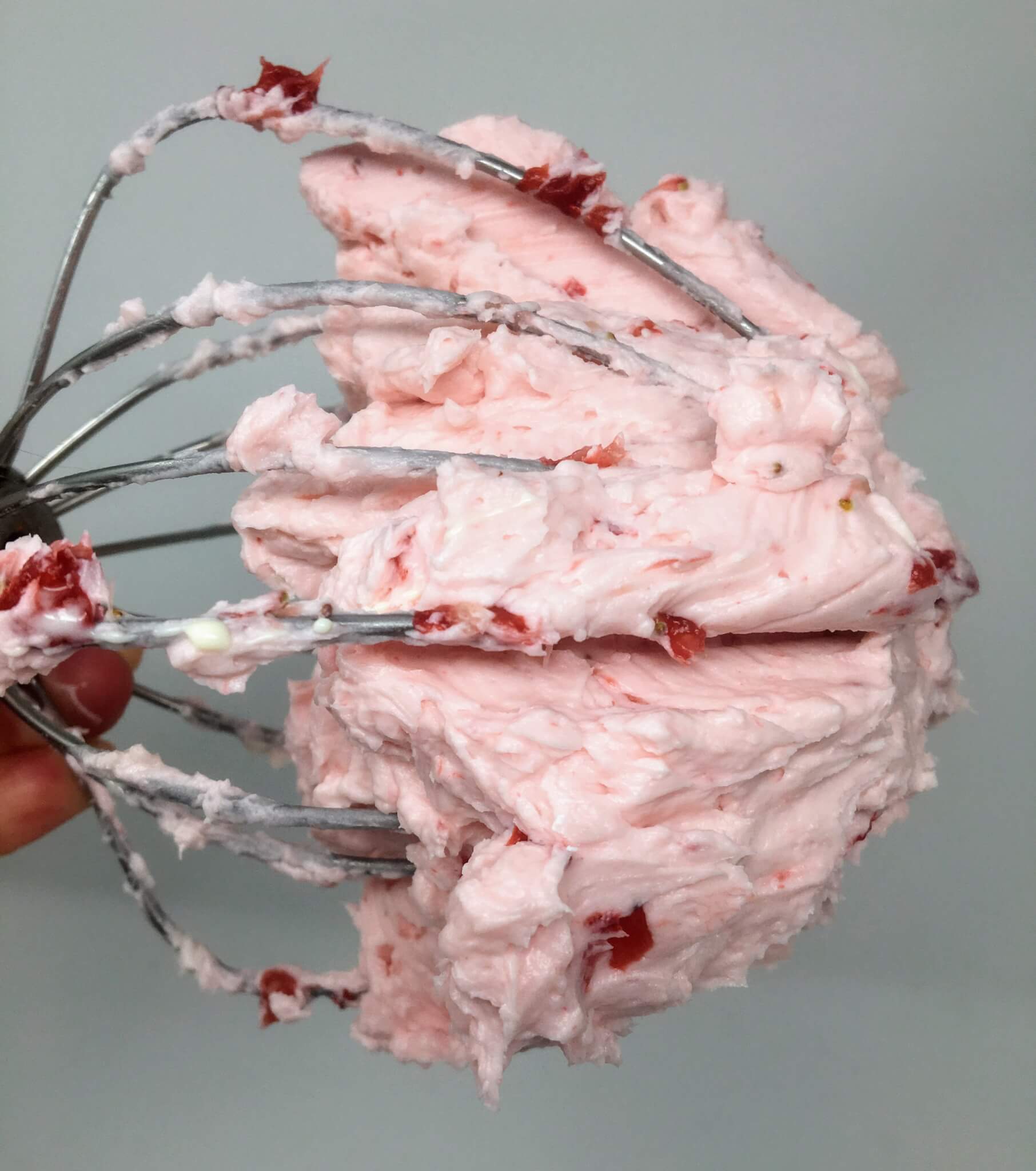 This Fresh Strawberry Buttercream Frosting Recipe is delicious and easy!

This is seriously my favorite vegan buttercream frosting recipe so far! The strawberries blend in perfectly to create the loveliest pink color. In this vegan strawberry frosting. Keep scrolling for this Fresh Strawberry Buttercream Frosting Recipe.

If you guys watch the YouTube video just know it’s a lot of me trying to get the baby to stop pulling the cords out of the wall! I’ve been doing live videos lately because it’s easier and fun.

Regular buttercream frosting often has egg yokes, butter, and/or heavy cream. Furthermore marshmallows generally contain gelatin. Gelatin is in many sugary products rendering them no longer vegan. It is a gelatinous ingredient made from pork and other animal materials. This vegan strawberry frosting is easy to make

About the ingredients: vegan strawberry frosting

Marshmallows are generally not vegan due to the fact they contain gelatin. The gelatin creates the shape and texture. However Smuckers marshmallow topping does not need gelatin. And it makes vegan strawberry frosting so delicious.

Another ingredient for this Fresh Strawberry Buttercream Frosting Recipe is vegetable shortening. It is thick and creamy. Vegetable Shortening is hydrogenated fat made from vegetable oil. Frostings become thicker and more stable..

Vegetable shortening is a great vegan alternative to lard or butter for baking purposes. It is solid at room temperature and does not need refrigeration. Therefore you can Store it up to one year. It makes the best vegan strawberry frosting.

The next ingredient is powdered sugar. Powdered sugar is also called confectioners sugar or icing sugar. It is made by grinding sugar into a powder.

You can actually make it at home. Just put granulated sugar in a coffee grinder! It is used in many icings and frostings. This frosting is so good on vanilla or chocolate cakes and cupcakes! Using fresh strawberries gives this frosting the loveliest aroma. Thanks for visiting Anyreasonvegans vegan dessert recipes. 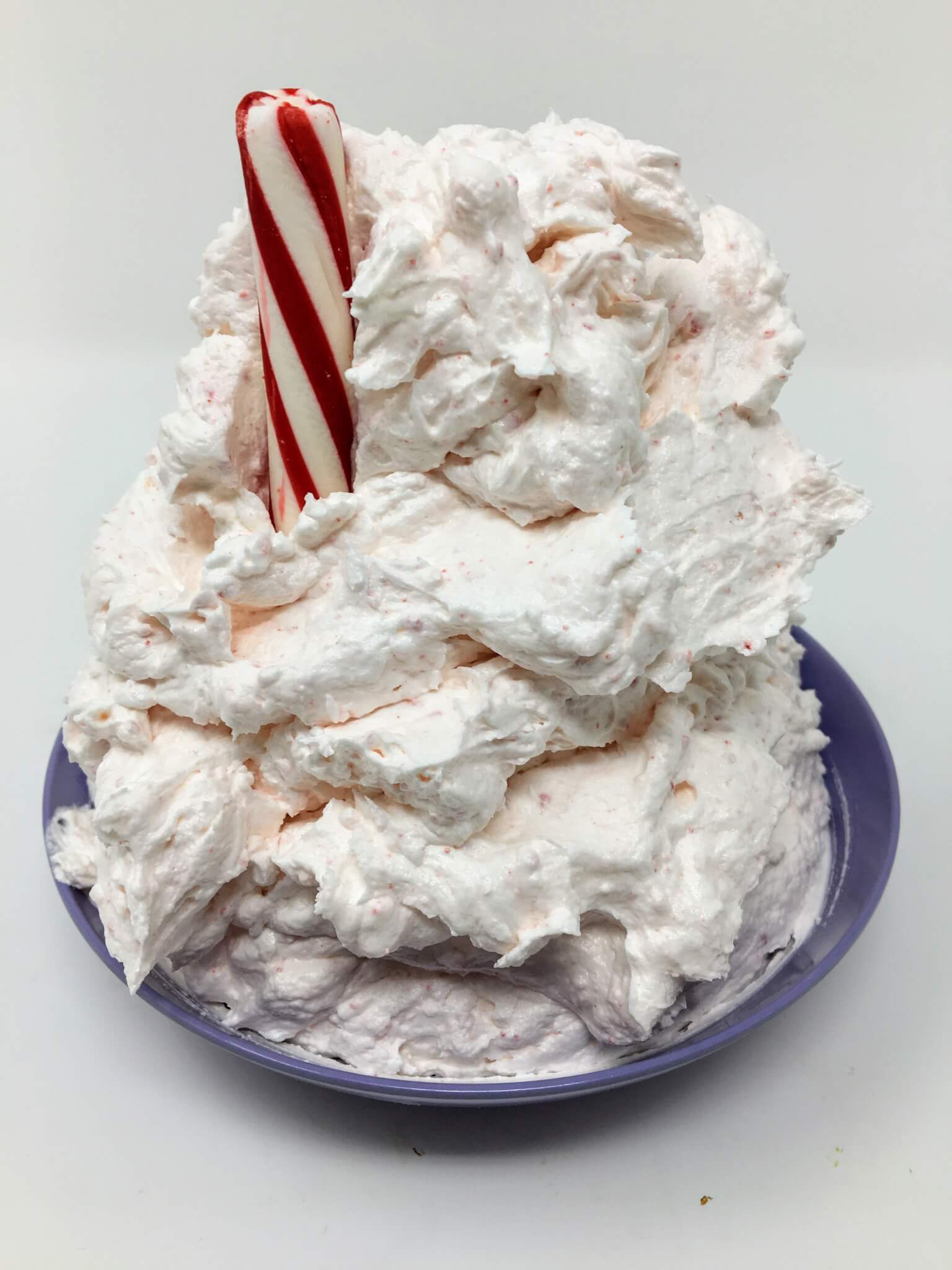 Candy canes are really fun to make vegan dessert recipes with. Christmas and the holidays are a great time for peppermint recipes. They are really tasty in vegan frostings, cakes, and bakes.

This Vegan Peppermint Marshmallow Buttercream Frosting is delicious and pretty to decorate with. They’re perfect for vegan Christmas recipes.

This thick fluffy candy cane frosting recipe is great for decorating cakes and cupcakes. It makes for simple piping also. My Vegan Buttercream Frostings are made without vegan butter or coconut oil.

I have so much fun making this festive frosting every year. It’s perfect for Christmas and the holiday season. I love it on chocolate cakes and cupcakes.

This candy cane frosting recipe is easy and festive.

Next combine vegetable shortening and smuckers marshmallow topping in a large mixing bowl and beat with electric mixer until thoroughly combined. Then powdered sugar to the candy cane frosting recipe mixture one cup at a time. Beat in between to blend in the powdered sugar slowly.

This is the best frosting for christmas cookies recipe

This vegan buttercream frosting recipe is great for the holiday season. 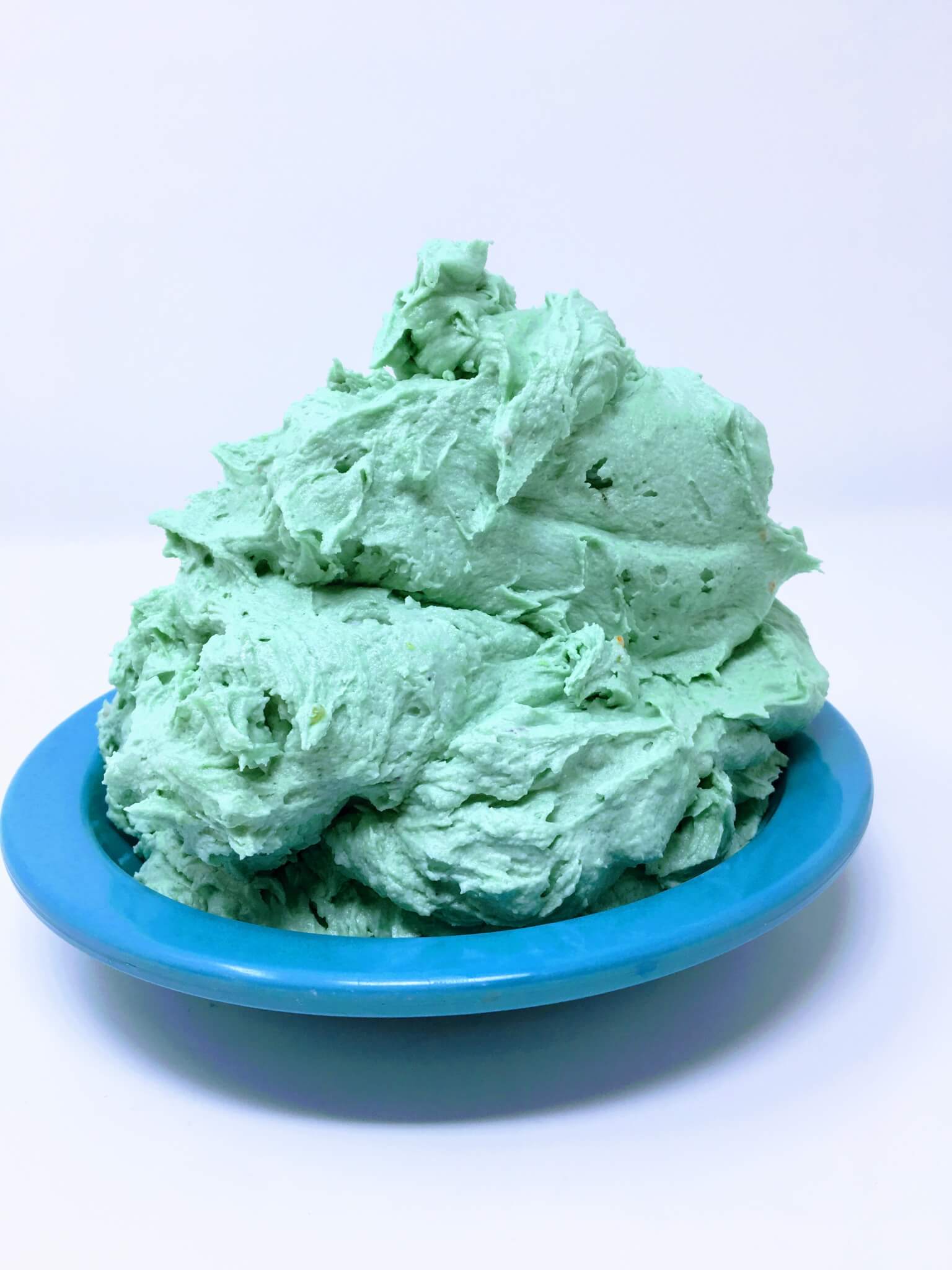 This Sour Patch Kids Buttercream Frosting is thick and delicious. This thick fluffy frosting is great for decorating cakes and cupcakes. It makes for simple piping also. You might be wondering, are sour patch kids vegan? Why yes they actually are?

My Vegan Buttercream Frostings are made without vegan butter or coconut oil. It goes great on sugar cookies as well. This frosting makes baking even more fun! Diaryfree easy vegan buttercream frosting recipe.

My Marshmallow Buttercream Frosting was so popular I decided to make more frosting recipes. I was looking around my kitchen trying to decide on a different unique flavor. Then I saw my sons sour patch kids lol.

I know they are vegan. Sour candy frosting? Yes I think so haha. Buttercream frosting is an icing or filling for pastries. It doesn’t necessarily contain butter or butter flavor.

This thick buttercream frosting consists of a fat and powdered sugar. The fat can be butter, lard, or shortening. Twice as much powdered sugar as fat is required. Vegan Sour Candy is so easy to use in frosting!

First Put vegetable shortening In a large mixing bowl. Use an electric mixer to blend up shortening by itself first. Combine the marshmallow topping next and blend some more.

Add powdered sugar 1 cup at a time blending intermittently. Blend on slow first to avoid making a mess with sugar. Continue to blend on medium then high.

Add vegan sour patch kids mixture to buttercream frosting before it hardens back up. Mix on high until thoroughly combined. Allow to chill in the fridge for approximately 20 minutes.

The hot sour patch kids water changes the consistency of the buttercream. That’s why it’s important to allow it to cool off a bit before blending. This sweet and sour candy topping is great for baked goods of all kinds.

You can see all Anyreasonvegans buttercream frosting recipes here.